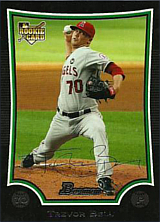 Pitcher Trevor Bell was selected by the Los Angeles Angels of Anaheim in the supplemental first round of the 2005 amateur draft. He was signed by scout Tim Corcoran for $925,000 and made his pro debut that summer with the AZL Angels, where he posted a 4.50 ERA in 4 starts. He spent the next season with the Orem Owlz and went 4-2 with a 3.50 ERA in 16 starts.

Trevor made his major league debut with the Angels in 2009 and spent a good part of the season with the team in both 2010 and 2011. He was a combined 4-8. 5.21 in 52 games during the three seasons, logging 11 starts and 115 2/3 big league innings. He was released by the Angels after spending the 2012 season in AAA, going 1-6, 8.27 in 10 starts and struggling with health issues. The Detroit Tigers signed Bell in December of 2012 but gave him his release during spring training in 2013. He landed with the Cincinnati Reds organization, who moved him to the bullpen full time; he had been a starter all through the minors until then, except for one season as a swingman with the Rancho Cucamonga Quakes in 2008. The change of role suited him fine, as he was 0-1, 1.72 with 17 saves in 27 games for the AA Pensacola Blue Wahoos. He also made 3 appearances in AAA with the Louisville Bats, going 1-0 with a 2.45 ERA. That performance earned him an invitation to the Reds' spring training in 2014. He made the Opening Day roster and his final big league appearance on April 7, his final professional season.

He is the grandson of Bob Bell, who famously portrayed Bozo the Clown on television from 1960 to 1984. In tribute, he sports a huge tattoo of the character on his left shoulder.