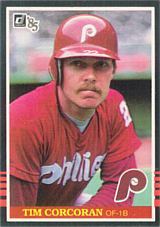 Tim Corcoran was nicknamed "Spring Training" for his uncanny ability to crush Grapefruit League pitching. Unfortunately, this ability generally disappeared when the regular season began, although he had a few good seasons as a platoon player. Playing in nine seasons between 1977 and 1986, his finest year came with the Philadelphia Phillies in 1984. Playing 102 games (with 208 at bats) he batted .341/.440/.486 with five home runs and 36 RBI, all career highs. His inability to hit left-handed pitching meant he could never hold a regular job in the bigs.

After playing, Tim was a coach for the Maine Guides in 1987, Reading Phillies in 1988, and Clearwater Phillies in 1989. He later was a scout for the Los Angeles Angels and was responsible for signing Tyler Chatwood, Rich Fischer, Robert Fish, Roberto Lopez and Sean O'Sullivan, among others. His brother, Pat Corcoran, was an outfielder in the Oakland A's chain from 1976-1978.