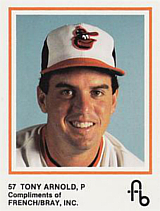 Pitcher Tony Arnold played college ball at the University of Texas at Austin and graduated in 1981 with a degree in physical education. On the diamond he was named an NCAA All-American that year. The Baltimore Orioles drafted Arnold in the 10th round of the 1981 amateur draft and he pitched in the Baltimore organization for seven seasons before finishing his playing career with two years in the Los Angeles Dodgers system. Arnold played parts of the 1986 & 1987 seasons with the Orioles, crafting a 5.06 ERA in 38 games (78 1/3 innings).