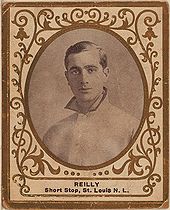 Tom Reilly played three seasons in the majors, but got most of his at-bats for the 1908 St. Louis Cardinals.

Rookie Patsy O'Rourke played the most games at shortstop in 1908 for the Cardinals, but he hit .195 and committed 41 errors so his last game was July 12. Chappy Charles played some shortstop as well that year, but appeared more often at second base and also played some third. That left room for Reilly to debut on July 27. He hit only .173 in 1908, but the team as a whole hit only .223. Although his fielding percentage was low, the Cardinals thought enough of him to bring him back for five games the following year.

Five years after that he came back for one game with the 1914 Naps, whose regular shortstop was Ray Chapman.