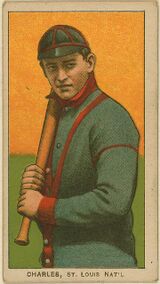 Chappy Charles roamed the infield for the St. Louis Cardinals in 1908, appearing in 65 games at second base, 31 at short, and 23 at third base, though his fielding was unremarkable. His .205 average was not far below the team average of .223, being the dead-ball era and the team lost 105 games. Third baseman Bobby Byrne hit .191, shortstop Patsy O'Rourke hit .195, and second baseman Billy Gilbert hit .214, so Chappy was in line with the others. Additionally, his .256 slugging percentage was higher than the others.

In 1909, he continued to play at both second and short, mostly at second base. His fielding ranged improved and his batting average went up to .236, although the team's average moved up to .243 (Bobby Byrne hit .214 at shortstop). Briefly the regular second baseman, he was traded to the Cincinnati Reds at the end of August. For them, he hit .256 in 13 games, on a team that hit .250. Tom Downey, the regular shortstop, hit .231. Downey continued to play regularly the next year, 1910, improving his average to .270 as he split his time between short and third. Charles appeared in only 4 games, hitting .133, and was done.

The SABR biography of Bob Unglaub says that Charles was the manager in 1897 of the "crack club" in Federalsburg, MD. Since Charles would have been 16 at the time if one believes he was born in 1881, it throws into question when he was actually born, and whether he was really 27 when he broke into the majors. The biography also says Charles changed his name when he came from New Jersey to Maryland. The SABR biography of Al Burris says that Charles played at the Maryland Agricultural College.