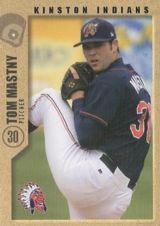 Tom Mastny grew up in Zionsville, IN, but was born in east Bontang, on the island of Borneo in Indonesia. He is the first major league player to be born in that country.

While two previous major league pitchers came from Furman University, neither had a decision in the majors, so Tom was the first to get a major league win or loss.

Matsny signed with the Yokohama BayStars for 2009.