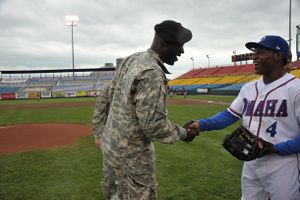 Raines shakes hands with an Army Major in 2009.

When he first came up to the majors in 2001 with the Baltimore Orioles, he was one of the youngest players in the American League. He had his most major league at-bats in 2004, when he hit .255. He fought for playing time against Luis Matos.

He is one of two players to play with his father in the same major league game (Ken Griffey, Jr. is the other). His father is of course Hall of Famer Tim Raines. His uncle, Ned Raines, was a minor league outfielder from 1978 to 1980.

Raines became hitting coach of the Aberdeen IronBirds in 2018.