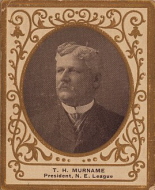 " . . . one of the most widely known baseball reporters in the country." - from the New York Times obituary of Tim Murnane

" . . . one of most remarkable and colorful characters in the game's history." - from the Hall of Fame's website

Tim Murnane had a tremendous influence on the sport of baseball, as a player, a manager, a baseball executive, an umpire, an eminent sportswriter and a discoverer of talent.

Tim started playing baseball as an amateur player in Connecticut and later as a semi-pro for Connecticut teams in 1869 and 1870. In 1871 he played for a team in Savannah, GA and also one in Mansfield, CT. [1]

Murnane played eight seasons in the majors (counting the NA as a major league), and led the NA in stolen bases in 1875. He was sixth in batting as a rookie in 1872. Murnane began his career as a catcher, but later was primarily a first baseman, at a time when first base was an important defensive position. He served as an umpire in the National Association for 6 games from 1873 to 1875, and in the National League for one game in 1886.

He was a sportswriter in Boston, MA for many years, first with his own publication, the Boston Referee, and then with the Boston Globe. He was a popular after-dinner speaker and discovered some of the game's early stars. In 1908, Murnane became one of the founding members of the Baseball Writers Association of America; he served as one of the group's officers, in the position of treasurer. In 1909, he was credited with coming up with a nickname for the Boston Red Sox: the "Speed Boys." This nickname would be used by sportswriters in Boston and nationally, off and on through 1912.

He was affiliated with the Boston Globe from late May 1888 to February 1917, and he wrote about many of the great stars of that time, including Ty Cobb, Tris Speaker and Babe Ruth. He also wrote historical articles about how baseball was played in the 1860s and 1870s. He was posthumously awarded the J.G. Taylor Spink Award in 1978.