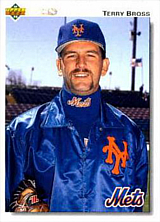 Terry Bross appeared in ten big league games with an ERA of 3.00 and a WHIP of 1.167. He was a Texas League All-Star in 1990, topping the league with 28 saves and 48 games finished that year. His opponent batting average against was a tidy .192. After parts of two seasons in the bigs, with the New York Mets and San Francisco Giants between 1991 and 1993, he spent several years pitching in Japan for the Yakult Swallows and Seibu Lions. In 1995, he led the Central League in ERA (2.33) and pitched a no-hitter in September.

He later became a player agent for Gaylord Sports, with clients including Dan Uggla, Mark Mulder, Bronson Arroyo and Luis Gonzalez. He was originally an agent for CMSG, but left in 2004 with the opportunity to run the baseball division at Gaylord Sports.

Bross also played basketball while attending St. John's University under the legendary Lou Carnesecca. He was the starting center on the Big East championship and Final Four team in 1985 which also featured Chris Mullin.