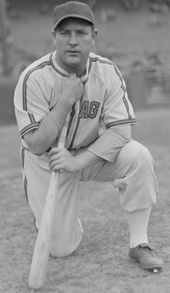 Taffy Wright hit .311 during a nine-year major league career. His career would have been longer but he made his debut at age 26 and he missed 1943-45 to the war.

In 1938 the Senators used Wright as a pinch-hitter quite a bit, getting him up to 100 games, but the league decided that Jimmie Foxx would instead be recognized as the league batting leader. Source: The New Bill James Historical Baseball Abstract, referring to "100 games = 100 games in the field" as the "Taffy Wright rule".

Wright grounded into the final out of Bob Feller's no hitter on Opening Day, April 16, 1940. He entered the Army in September 1942 and was discharged in November 1945. He played service ball while at Fort Bragg in North Carolina, in Hawaii and in the Marianas.

After his major league days he played in the minors for seven more years, mostly hitting well over .300.