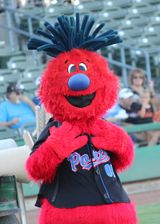 Stockton Ballpark in Stockton, CA, is the home of the Stockton Ports, the Oakland Athletics' Low-A West farm team. It lost the 2020 California League All-Star Game to the pandemic.

The Ports call their playpen Banner Island Ballpark, but the sign under which fans pass while entering the main gate reads Stockton Ballpark.[1] Absent lease terms to the contrary, a facility's owner names the facility, and in this case that is the city of Stockton.

Located in the A's protected territory, the so-called Banner Island may have been an island in the 1800s, but today it is a peninsula. Charles Weber inspired its name by flying the U.S. flag after Union victories, Coxey’s Army protesters camped here before their Panic of 1893 march on Washington, DC, World War II ships were built here – and professional baseball arrived by the 1880s.