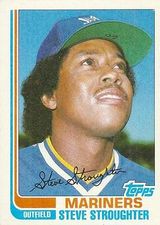 Steve Stroughter was originally drafted by the California Angels in the 15th round of the 1970 amateur draft, but he chose not to sign. He was drafted in the secondary phase of the January 1971 amateur draft by the Chicago Cubs, but he again did not sign. He was again selected in the secondary phase of that June's draft, by the San Francisco Giants, and he decided to sign. On October 24, 1975, he was purchased by the California Angels from the Giants. On April 5, 1979, he was released by the Angels and on June 5 he was signed by the Seattle Mariners. On December 19, 1980, he was traded to the Minnesota Twins for Mike Bacsik. On May 28, 1981, he was purchased by the Mariners.

Stroughter spent over a decade in the minors before making his big league debut with the Mariners on April 7, 1982, at the age of 30. Pinch-hitting for Jim Essian, Stroughter grounded out in his first big league at bat, against Doug Corbett of the Minnesota Twins. A solid minor league player who hit for average and some power, Stroughter hit only .170 in 26 big league games (47 at bats). Perhaps the best game of his career occurred on May 4. He went 2-for-4 with a home run off Dennis Martinez of the Baltimore Orioles. He played his final big league game on July 24.

Following his big league career, he returned to the minors and played baseball for the Hanshin Tigers in Japan in 1983.

Stroughter appeared on an episode of Judge Jeanine Pirro as a witness on December 17, 2008. He died in March 2018.