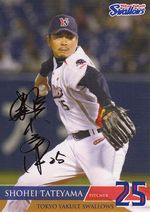 Shohei Tateyama has been an All-Star pitcher in Nippon Pro Baseball.

An All-Star for the fourth time in 2011, he was 11-5 with a 2.04 ERA and only 29 walks in 180 2/3 innings. Offensive levels were down all over Japan as a new standard baseball was being used. He made the top 5 in ERA for the third time in four years, behind Yoshimi, Utsumi and Hirokazu Sawamura this year. He tied Sawamura for 5th in wins, was 5th in innings (between Utsumi and Ishikawa), led with 7 complete games, tied Yoshimi for the most shutouts (3), tied for 7th with 12 homers allowed (even with Maximo Nelson), placed 9th in hits allowed (146, between Sawamura and Yoshimi), finished 8th with 130 strikeouts and was second with a 0.97 WHIP (second to Yoshimi).