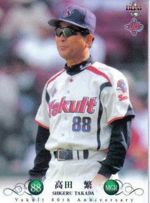 Shigeru Takada has had a long and successful career in Japanese baseball. He was a 7-time Best Nine pick in college, a 8-time All-Star, Rookie of the Year and four-time Best Nine in Nippon Pro Baseball, a Japan Series MVP and later coached, was an announcer, was a general manager and a manager. In 2008, Takada will return to the managerial role, taking over the reigns of the Tokyo Yakult Swallows.

Takada played on a Koshien Tournament winner in high school. In the spring of 1965, he won the batting title in the Tokyo Big Six University League. He was a 7-time Best Nine pick while at Meiji University. His 127 hits were a league record for almost 50 years, before Shun Takayama broke it. He was a number-one draft pick in 1967, taken by the Yomiuri Giants.

In 1996, Takada returned to Yomiuri as a coach. He managed the Giants' ni-gun team from 1998 to 2001. After that, Takada became a baseball commentator.

Takada was general manager of the Nippon Ham Fighters from 2005 through 2007, helping form the team that won the first Japan Series in Nippon Ham's history, doing so in 2006.