Outfielder Sherry Magee, a player from the deadball era of the early 20th Century, was one of the top players of his time. During his career, spent mostly with the Philadelphia Phillies, he won a National League batting crown and paced the league in RBIs four times. 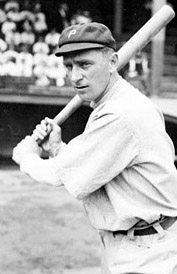 Signed by the Phillies as a 19-year-old in 1904, Magee spent his first eleven seasons with the club. He had his best season with the Phillies in 1910, when he led the NL with a .331 average, 110 runs scored, and 123 RBIs. He missed five weeks of the next season, 1911, due to a suspension received after knocking out umpire Bill Finneran during an argument. In 1914, he paced the NL with 171 hits, 39 doubles, and 103 RBIs. During his time in Philadelphia, he was in the top ten in batting average five times, in slugging percentage ten times, in runs scored seven times, in doubles nine times, in triples seven times, and in homers seven times. He also led the league three times in RBI in that period.

Following the 1914 season, Magee was passed over for the Phillies managerial job and demanded a trade. He was sent to the Boston Braves, who were coming off a surprise win in the 1914 World Series, but his production started to drop off and the Braves were unable to repeat. Ironically, it was the Phillies who made it to the World Series that year, their only appearance before 1950. During the 1917 season, he was selected off waivers by the Cincinnati Reds, and he hit .321 for the remainder of the year. In 1918, he hit .298 with 13 triples and led the NL in RBIs for the fourth and final time, with 76. He missed two months of the 1919 season due to illness and hit only .215, but the Reds captured the NL crown. His last appearances in the major leagues were in the tainted 1919 World Series against the Chicago White Sox; he had two at-bats, including a hit in Game 7.

After the playing days in the majors[edit]

When he was done in the major leagues, Magee played several years in the minors, primarily in the American Association, and proceeded to hit over .300 until age 40. He was player-coach for Baltimore in 1926. After serving as an umpire in the New York-Pennsylvania League in 1927, he was an NL umpire in 1928, working a full slate of 148 games, but he died of pneumonia at age 44 in 1929, before the start of the season.

A New York Times article in the winter of 1911 indicated that "Sherwood Magee, the star batsman of the National League, has signed to play basket ball with a Buffalo team." This was apparently in violation of a team rule.

Although he played at a very high level of ability for a long time, Magee's career may not have been long enough to reach the Hall of Fame marks that are often required. He didn't get to 3,000 hits, although his 2,169 hits were achieved completely in the dead-ball era when hits were hard to come by. He didn't have 500 doubles, although his 425 doubles, 166 triples and 83 home runs show substantial power at a time when few players displayed much power. His 441 stolen bases put him at # 53 of all time.

Both the Black Ink and Gray Ink Hall of Fame appraisal methods show him as better than the average Hall of Famer. In 2008 he was on the pre-1943 Veterans Committee ballot for Hall of Fame consideration, but he was not elected. There is still hope that he will eventually make it to Cooperstown, however.

One of the most similar players, based on similarity scores, was his near-contemporary Bobby Veach. There are two Hall of Famers on his list of most similar players, one of whom is Edd Roush, his Cincinnati teammate. The two had similar power, although Roush had a higher batting average due to playing much of his career in the lively ball era. One can easily argue, however, that Magee was a better and more dominant player since he does much better on the Black Ink and Gray Ink tests.