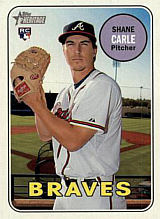 Shane Carle began his professional career in 2013, a 10th round pick of the Pittsburgh Pirates and scout Brian Tracy. With the Jamestown Jammers that year, he went 1-0 with a 2.15 ERA in 14 games (four starts). He pitched for the West Virginia Power and Bradenton Marauders in 2014, going 4-8 with a 3.68 ERA in 27 games (23 starts). On November 11, he was traded to the Colorado Rockies for pitcher Rob Scahill. He began 2015 with the New Britain Rock Cats.

Carle made his debut with Colorado on April 14, 2017, pitching one scoreless inning of relief against the San Francisco Giants. He only made two appearances in Denver, banished to the Atlanta Braves for future considerations at the beginning of 2018. He had a fine year out of the Bravo bullpen, making 53 appearances with a 4-1 record, 2.86 ERA and one save in 63 innings. When things went south the next year (9.64 ERA in 6 games), he was sold to the Texas Rangers, finishing the year in Triple A.