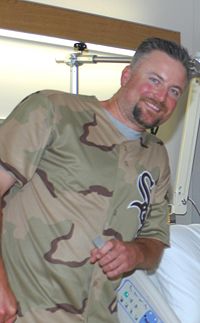 Pitcher Scott Linebrink was selected by the San Francisco Giants in the second round of the 1997 amateur draft and made his pro debut that summer with the Salem-Keizer Volcanoes before being promoted to the San Jose Giants, with whom he was 2-1 in 6 starts. He won 10 games for the Shreveport Captains in 1998 and made the Texas League All-Star team before his season was cut short by a shoulder injury. After missing half of the next season, he struggled in his return to Shreveport, going 1-8 in 10 starts.

Linebrink began 2000 with the Fresno Grizzlies before being called up the Giants in April. He pitched a shutout inning in relief against the Arizona Diamondbacks on April 15th before being sent back down to Fresno two days later. He was recalled again in July and shortly thereafter traded to the Houston Astros for Doug Henry. The Astros sent him to the AAA New Orleans Zephyrs, with whom he went 2-0 with a 1.80 ERA and 22 strikeouts in 11 games out of the bullpen before earning a September call-up with the Astros. He spent the majority of 2001 back with the Zephyrs, earning three cups of coffee in the bigs with Houston over the course of the season.

Linebrink split the 2002 campaign between the Astros, with whom he had a 7.03 ERA in 22 games, and the minors and missed a month due to an elbow injury. He began 2003 back with New Orleans, but after two starts with the Zephyrs, he earned a promotion back to Houston. He went 1-1 with a 4.26 ERA with the Astros and posted a 4.03 ERA in 6 starts. At the end of May, he was claimed off waivers by the San Diego Padres, and he remained a member of their bullpen for the rest of the season, going 2-1 with a 2.82 ERA in 43 games for San Diego.

Linebrink spent the entire 2004 campaign in the majors with the Padres, going 7-3 with a 2.14 ERA and 83 strikeouts in 73 appearances out of the pen. He put up even better numbers the next year, going 8-1 with a 1.83 ERA in 2005, and earned his first big league save on September 30th against the Los Angeles Dodgers. In 2006, he won 7 games as a member of the Padres bullpen and pitched in 73 games for the third straight season.

Linebrink signed as a free agent with the defending World Champion St. Louis Cardinals for the 2012 season, but never pitched for them. He made the team out of spring training, but was placed on the disabled list on the season's second day with a shoulder inflammation. However, he suffered a setback in rehabilitation, and on June 8th the Cardinals decided to release him rather than place him on the 60-day disabled list, seeing that he would not have a chance to pitch before the expiry of his one-year contract. He never pitched again in the majors after that.

Linkebrink wore the #71 starting in 2007 season in honor of Padres bullpen catcher Mark Merila, who was fighting a brain tumor.