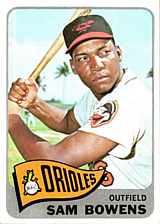 He broke into the majors with a good cup of coffee in 1963 with the Baltimore Orioles, hitting .333 and slugging .500 in 15 games. The next year, he was the Orioles' starting right fielder (the other outfielders were Boog Powell and Jackie Brandt) as the Orioles had traded away the regular from 1963, Al Smith. Bowens was three years older than Powell and a couple years younger than Brooks Robinson. He hit 22 home runs with a .263 average in 1964, but for the rest of his major league career struggled to stay over .200 and became a backup. A leg injury did not help, and the emergence of young Orioles players Curt Blefary and Paul Blair just made things tougher. Bowens was able to stay in the majors despite his hitting as a result of fielding ability. He had a strong arm and played good defense. The December 1966 Baseball Digest referred to a catch made by Bowens on July 18 as the most memorable play of the 1966 season. The article referred to it as "sheer execution" as the game was not on the line at the time.

After his death, it was revealed that he was actually one year older than was thought at the time he was playing. He is not to be confused with Sam Bowen.