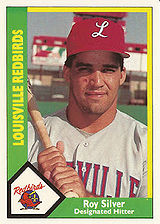 After his playing career, Silver was a coach for the Savannah Cardinals in 1991 and Springfield Cardinals in 1992. He managed in the Cardinals chain from 1993 to 1997 and the Tampa Bay Devil Rays chain in 1998-1999. He then became a player development assistant in the Texas Rangers organization.

Silver is currently the Owner and principal instructor at the Winning Inning Baseball Academy in Clearwater, FL. Its focus is on helping players recover from personal problems, including addictions to alcohol and other drugs of abuse. He was instrumental in getting OF Josh Hamilton to turn his life around after addictions almost ended his baseball career, and later worked with Matt Bush, whose alcoholism landed him in jail.