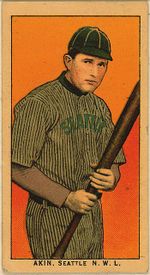 Roy Akin was a minor league player in the Pacific Coast League. In 1911, Akin hit into the only unassisted triple play by an outfielder. Akin lined out to Walter Carlisle. Carlisle ran from shallow centerfield to second base thus retiring the runner who took off too early en route to third base. He then beat the runner on first back to the bag completing the odd 8 unassisted triple play.

The next season Akin turned an unassisted triple play of his own. Akin was playing third base for the Houston Buffaloes and Waco had runners on second and third during the May 9 game. A hit-and-run bunt did not work as planned as Akin caught the bunted ball, stepped on third to force the runner there, then tagged out the runner coming down from second base.