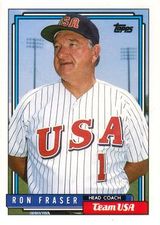 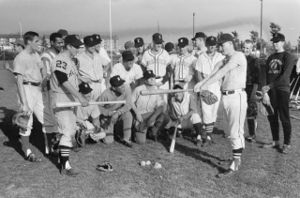 Fraser shows off his stuff to some Dutch players in 1962

Ron was a reliever in college. He then went to the Army, where he began his coaching career.

Fraser managed at least three different national teams. While in the Army and serving in West Germany, he guided the German national team to a Bronze in the 1958 European Championship. The performance impressed the Dutch national team, who hired him away. He then led the Netherlands to an easy Gold at the 1960 European Championship despite media criticism that he was being too tough on the club. The Dutch prime minister asked him what it would take to make the arrangement longer-lasting and Fraser said (what he considered unrealistically high) $19,000 a year with time off to go to the USA. The prime minister agreed. 32 years later, Fraser told Sports Illustrated "I never made that mistake again in negotiations." Fraser led the Dutch to Gold once more at the 1962 European Championship.

Fraser was a contestant on the What's My Line? television program after 1962 and the panel could not figure out Ron's job of Dutch baseball coach. His performance on the show made an impression on University of Miami president Henry King Stanford, who offered Fraser a job coaching at Miami. It was an odd way to begin a legendary career.

He managed Team USA in the 1973 FEMBA Amateur World Series (a Gold), 1987 Pan American Games and 1992 Olympics, his third different national team. He also coached for them when they won Silver in the 1969 Amateur World Series, a late replacement for Frank Sancet, who was sidelined by medical issues.

Sources include Baseball in Europe by Josh Chetwynd