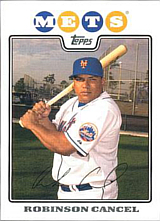 Cancel's minor league career stretched from 1994 through 2013. He played for the Long Island Ducks of the Atlantic League in 2010 and wrapped his pro career in the Mexican League, first with the Monterrey Sultanes in 2012 and then with the Minatitlan Petroleros in 2013. Cancel became a manager with the GCL Braves in 2015 and Danville Braves in 2016. He moved to the Colorado Rockies' organization as coach of the Boise Hawks in 2017 before seizing the skipper's reins of the Asheville Tourists in 2018-2019. Cancel was slated to return to Asheville in 2020 before the COVID-19 pandemic caused the minor league season to be cancelled.

Cancel also has winter league coaching and managerial experience. He served as a coach for the Tomateros de Culiacan of the Mexican Pacific League during the 2017/2018 season. The following year he replaced Lorenzo Bundy as team manager on 11/3/2018, but was himself fired on 1/6/2019. The following winter he replaced Jesus Feliciano as Indios de Mayaguez manager on 11/21/2019. In this instance, Cancel finished the season as manager. Replacing managers is a popular technique in the winter leagues to try and change a team's performance, much more so than in MLB. Cancel has been hired to manage the Tiburones de Aguadilla team in 2020/2021. The Sharks play in Puerto Rico's Roberto Clemente Professional Baseball League.