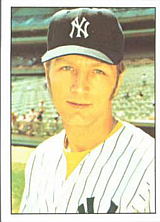 Rick Bladt played two seasons in the major leagues, six years apart. He appeared in 10 games for the Chicago Cubs in 1969 and 52 games for the New York Yankees in 1975. Bladt is sometimes mentioned as part of the famous 1969 Cubs team that "choked", but he only had 13 at-bats and 7 games in the field. With the Yankees in 1975, he was called up in mid-July to be the team's regular center fielder, one month after Elliott Maddox's season was ended by injury. He started for the remainder of the season, playing between All-Stars Bobby Bonds in right and Roy White in left.

Bladt also had a long minor league career, playing for the Syracuse Chiefs from 1970-1976 and appearing in 846 games, second most in franchise history. He is remembered as the Syracuse outfielder trying to find the disappearing ball in an International League game in 1976. Art Gardner hit a ball to the fence and the ball disappeared in the ivy wall. While Bladt searched for it, Gardner went around the bases for an apparent inside-the-park home run, until umpires called it a ground-rule double. Apparently, the ball never was found.

When Chad Mottola hit his 113th double in the International League in August 2006, he passed Bladt for third on the all-time list for most doubles in the league.