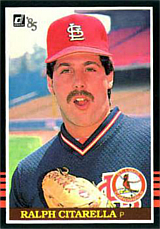 "Ralph Citarella will have to wait for another day for his first big-league victory." - Bob Costas, NBC, June 23, 1984

Ralph Citarella was the starting pitcher for the St. Louis Cardinals in the famous June 23, 1984 game in which Ryne Sandberg of the Chicago Cubs hit two dramatic homers off Bruce Sutter. Ralph had been okay that day, allowing 5 earned runs in 5 1/3 innings and in line for a W. The Cards blew a 9-3 lead in the game, then Sandberg's first homer off Sutter tied the game, 9-9, in the 9th. An inning later, Sandberg took Bruce for another ride, the Cubs later winning in the 11th after pushing a run across facing the combo of Dave Rucker and Jeff Lahti.

As for Ralph, he kept waiting for that victory Bob Costas promised him. And waiting. And waiting. It never came. He only made one more big league start, limiting the Montreal Expos to 3 runs in 6 innings on June 27th, but the Cardinals only scored twice. He moved to the bullpen in July, finishing the year with a 3.63 ERA, before being sold to the Philadelphia Phillies in January of 1985. He would only resurface for 5 relief outings with the Chicago White Sox in 1987.

After his playing days, Citarella was pitching coach of the Newark Bears in 2013.