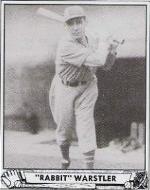 Rabbit Warstler played eleven seasons in the major leagues. Never much of a hitter (except for copious sacrifices), he was considered a good fielder. Connie Mack called him the best defensive infielder in the American League when Warstler was with the Philadelphia Athletics, which Mack managed.

Warstler played in Indianapolis before coming to the majors, beginning in 1927.

In 1934 he was part of a famous tour of Japan by major league baseball players such as Babe Ruth, Lou Gehrig, Lefty O'Doul, and Moe Berg.

After his major league days, Warstler played a year with the Los Angeles Angels in 1941 and then briefly with the Minneapolis Millers in 1942.

He died of cancer.

He was the last of five major leaguers remembered with the first name "Rabbit".