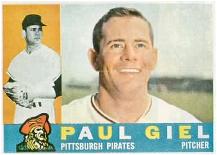 A better football player than a pitcher, halfback Paul Giel was runner-up to Johnny Lattner for the 1953 Heisman Trophy. He was a two-time All-American at the University of Minnesota and is a member of the College Football Hall of Fame [1].

After his outstanding collegiate football career, Giel signed with the New York Giants on June 9, 1954 to pursue a career in baseball. Giel received a $60,000 signing bonus, a record amount for the Giants at that time. Giel was in need of minor league seasoning to hone his pitching skills, but major league rules required teams to keep "bonus babies" on their major league roster for at least their first two seasons or risk being drafted by another team if sent to the minors. Giel made his debut impressively on July 10th against the Pittsburgh Pirates. He entered in the 9th inning and struck out all three batters that he faced. But the Giants used him sparingly, as was often the case with bonus babies. He made only six appearances in 1954 and 34 appearances in 1955. Giel spent the next two years in the Army. He returned to baseball in 1958, pitching 5 games for the Giants' AAA Phoenix team and 29 games for the Giants, who were now in San Francisco. He started 9 games and relieved in 20 for the Giants, compiling a 4-4 record and a 4.70 ERA. In 92 innings, he walked 55 batters and struck out the same amount.

In April 1959, the Giants waived Giel, and he was selected by the Pittsburgh Pirates. He struggled in four relief appearances for the Pirates and was sent to their AAA Columbus team in May 1959, where he pitched the rest of the season. Giel won a spot in the Pirates bullpen in spring training of 1960. Through July 8th, he made 16 appearances in relief, pitching 33 innings. He compiled a 2-0 record but his ERA was 5.73. In mid-July, after being scored upon in six consecutive appearances, Giel was optioned back to Columbus where he pitched the rest of the season while the Pirates went on to win the 1960 World Series.

The Pirates sold Giel's contract to the Minnesota Twins in February 1961. He began the 1961 season with the Twins but was traded to the Kansas City Athletics on June 1st after going 1-0 with a 9.78 ERA for the Twins including 17 walks in 19 innings. He was traded along with Reno Bertoia in exchange for Bill Tuttle and a player to be named later. Giel appeared in one game for the Athletics before being returned to the Twins on June 10th as the player to be named later. In effect, he was traded for himself. He then retired from baseball.

Giel was the athletic director at the University of Minnesota from 1972 to 1988. He died of a heart attack in 2002 while in his car returning from a Twins game.