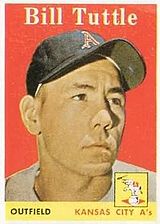 Tuttle was the first baseball coach at Carl Sandburg College.

Tuttle died in Anoka, MN on July 27, 1998 at the age of 69. In his later years, he endured many disfiguring surgeries owing to oral cancer as a result of his chewing tobacco habit (a chaw was visible in his cheek on many of his baseball cards). He joined Joe Garagiola in his campaign to discourage the use of "spit tobacco."