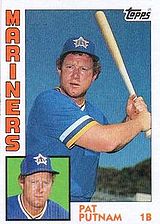 Pat Putnam was a line-drive hitting first baseman who was a starter for a few seasons in the late 1970s and early 1980s. He fist came up with the Texas Rangers for a cup of coffee at the end of the 1977 and 1978 seasons before earning the starting job at first base in 1979. His rookie season turned out to be his best in the majors, as he hit .277 with 18 homers and 64 RBIs in 139 games and was named to the 1979 Topps All-Star Rookie Team. He kept the starting job in 1980 and 1981, but his power fell down a notch each season. When he started the 1982 season slowly, the Rangers brought up rookie Dave Hostetler from the minors and he immediately went on a tear, relegating Putnam to the bench.

After the 1982 season, he was traded to the Seattle Mariners in return for relief pitcher Ron Musselman and had a decent comeback season in 1983. He played 144 games and hit .269 with a career-high 19 homers and 67 RBIs, numbers almost identical to those he had posted in his rookie year. However, once again, he lost his job to a hot-shot rookie, this time Alvin Davis, who started the 1984 season red hot on his way to being named the 1984 American League Rookie of the Year. The Mariners traded Pat to the Minnesota Twins in August, but he only played 14 games for them, hitting .069.

Putnam had been picked by the Rangers in the secondary phase of the 1975 amateur draft out of the University of South Alabama. He established himself as a prospect when he was named the Western Carolinas League Player of the Year for the Asheville Tourists in 1976. That season, he hit .361 with 24 homers and 142 RBIs in 138 games, winning the first Triple Crown in the circuit's history.