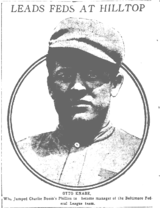 Otto Knabe played eleven seasons in the major leagues. A second baseman, he led the league several times in sacrifice hits and was frequently among league leaders in defensive statistics. At the end of his playing career, he served as player-manager for a couple of seasons in the Federal League.

On Opening Day of the 1915 season for the Baltimore Terrapins, it was said that Kid Gleason brought a big contingent of Knabe's Philadelphia friends to see the opener. This was rather generous of Gleason, because it was the young Knabe who took away the 40-year-old Gleason's job at second base with the Philadelphia Phillies in 1907. In 1919, it was stated that Knabe and Gleason had for several years been partners in a billiard parlor in Philadelphia.

Knabe's birthplace, Carrick, PA, is now a neighborhood located on the south side of Pittsburgh, PA.

His likeness and biography were featured in the December 21, 1907 edition of Sporting Life. He played for and managed amateur teams in the Pittsburgh area before coming to pro ball in 1905. He was described as short, stocky, active, aggressive and full of pluck. The paper also stated:

"Knabe (in 1907) displayed such speed as a fielder and base runner and hit so well that he at once was hailed as the National League 'find' of the season."

This manager's article is missing a managerial chart. To make this person's article more complete, one should be added.
Retrieved from "https://www.baseball-reference.com/bpv/index.php?title=Otto_Knabe&oldid=1253790"
Categories: