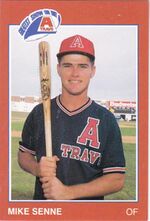 Mike Senne was an outfielder who is most notable for winning the 1986 College World Series Most Outstanding Player award while a senior at University of Arizona. He is one of three players from University of Arizona to win that award. The others are Steve Powers and Terry Francona.

Following his collegiate career, he played professionally, although he never made it to the big leagues. He was drafted by the St. Louis Cardinals in the 14th round of the 1986 amateur draft, and began his professional career with the Johnson City Cardinals that year. In 206 at-bats, he hit .282 with six home runs, 38 RBI and 21 stolen bases.

In 1989, his final professional season, Senne wound up in the San Francisco Giants organization. He played for the Salinas Spurs and Shreveport Captains, hitting .286 in 91 at-bats with the Spurs and .194 in 36 at-bats with the Captains.