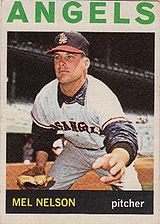 Mel Nelson began his pro career as an outfielder and hit 27 home runs for the Fresno Cardinals in 1955. He was converted to pitching in 1957 and spent parts of six seasons in the majors.