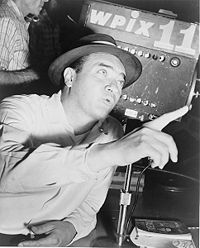 Mel Allen, legally Melvin Israel until 1943, was a broadcaster who had a sixty-year career.

Allen began broadcasting in 1935 while a student at the University of Alabama. Two years later, he was hired as a staff announcer by CBS. Finally, in 1939, he was assigned to work New York Yankees games, a position he held through 1964, with an interruption for World War II. In fact, for the 1939 season, Allen worked Yankees and New York Giants home games.

As the Yankees' broadcaster, Allen became the voice of baseball for many. He was in the booth for 21 American League pennants and 15 World Series titles. He was also responsible for the nicknames Joltin' Joe DiMaggio and Phil "Scooter" Rizzuto.

After calling Yankees games for more than 20 years, Allen was inexplicably fired in 1964. The firing devastated him and he did not call games for any club from 1965 to 1967.

In 1968, Allen was play-by-play man for the Cleveland Indians. He then turned to doing voice-over work. Mel Allen's familiar "How a-bout that?" became known to a younger generation of fans with his work on This Week in Baseball, a half-hour syndicated program featuring highlights in baseball from the week that had just passed. Allen continued with This Week In Baseball until health issues forced him to hand over the microphone to Warner Fusselle after the 1995 season.

In addition to his baseball work, Allen also broadcast college football, working a large number of bowl games. His brother, Larry Allen, was the broadcast engineer when he was the voice of the Yankees and also on football broadcasts.

Mel Allen and Red Barber were the first recipients of the Ford Frick Award for broadcasting in 1978.