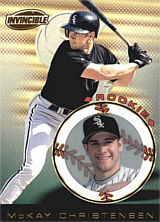 "...most people don't understand what baseball is really about. It's consuming. It requires a huge sacrifice. It's hard to ever become anything other than a baseball player." - McKay Christensen

McKay Christensen had a four-year major league career from 1999 to 2002, including a role on the division-winning Chicago White Sox in 2000.

Christensen was born in Upland, CA, one of several major league players born there. He attended Clovis West High School in the Fresno area and was a star running back, scoring 44 touchdowns as a senior. McKay was a first-round pick, 6th overall, in the 1994 amateur draft by the California Angels. When the Angels signed him, they agreed to let him go on a Mormon mission, which he did in 1995. He was on this mission when he was traded to the Chicago White Sox as part of a package to lure Jim Abbott back into the Halo fold. McKay debuted with the GCL White Sox in 1996 and moved his way up the ladder between 1996 and 1999, never hitting over .290, but smoking some triples and stealing some bases.

In 1999, Christensen came up to the big club for 28 games, hitting .226 with a home run and two stolen bases. Chris Singleton was the 26-year-old rookie center fielder for the White Sox that year, and he hit .300 with 17 home runs and 20 stolen bases. He was not about to be usurped by McKay. The next season, 2000, McKay was back in Triple A, posting a batting line of .264/.325/.368 with 28 stolen bases. It was good enough to come back for 32 games. Jeff Abbott was the backup center fielder, and he hit .274 that year, while Christensen batted .105 in 19 at-bats. He also appeared in a game in the Division Series against the Seattle Mariners.

In 2003, playing for the Philadelphia Phillies' affiliate in Triple A, the Scranton/Wilkes-Barre Red Barons, he posted a batting line of .238/.294/.370 in 47 games. An injured shoulder hampered his success, and he had to have surgery. In 2004, he played 5 games for the Cincinnati Reds Triple A team, the Louisville Bats in the IL, getting 5 hits. He made the decision at that point to move on from baseball. It was a surprise to manager Rick Burleson, who tried to talk Christensen out of it.

In 2005, Christensen joined his family, successful developers in Utah. He was in Lehi, UT planning the Traverse Mountain development.