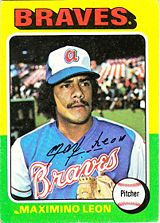 Max León, known for his slider and control, was 142-92 in 16 seasons in the Mexican League. He made his debut there in 1968 after an 11-3 rookie year in the Mexican Center League. In 1972 León went 21-8 splitting his season between the Charros de Jalisco and the Southern League's Savannah Braves. After spending the next six seasons in the Atlanta Braves system, mostly at the major-league level, León returned to Mexico for another decade playing for the Alacranes de Durango, Piratas de Campeche, Diablos Rojos del Mexico, Tecolotes de los Dos Laredos, Olmecas de Tabasco, Leones de Yucatán y Rieleros de Aguascalientes. In 1983 he was 13-1 with a 2.11 ERA for the Diablos Rojos del Mexico. He retired in 1989 with a 142-92 record in the Liga Mexicana and a 174-120 record in his pro career. In 1997 he was elected to the Salon de la Fama.

León also dazzled in winter ball. He was 126-76 in the Mexican Pacific League playing for the Tomateros de Culiacan and Naranjeros de Hermosillo, for the best winning percentage in LMP history. His 2.44 ERA is 3rd in the LMP all-time behind Vicente Romo and Horacio Pina. He also was LMP Novato del Año (Rookie of the Year) in 1969, playing for the Tomateros de Culiacan.

He later scouted for the Houston Astros. His son Maxwell León has played in the minors.

Max was selected in April 2006 as a Sports Manager of the Aguilas de Mexicali. As of 2011, he was coaching for the Diablos Rojos.