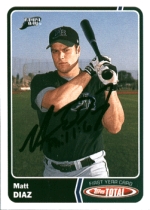 Matt Diaz is an outfielder, who has played most of his major league career for the Atlanta Braves.

In 1998 in college he was a Freshman First Team All-American in the outfield, and in 1999 he made the College World Series All-Tournament Team in the outfield for Florida State University.

Diaz was a 17th round draft pick by the Tampa Bay Devil Rays in the 1999 amateur draft. He was signed by scout Mark McKnight and maed his pro debut that summer. Although drafted at the age of 21, he was still kicking around the minors when he was nearly 27 years old and had become the all-time leader in hits for the Rays at the minor league level with 789. Finally, the Devil Rays released him and the Kansas City Royals snapped him up and after a year, let him go.

In December of 2010, he signed a two-year contract with the Pittsburgh Pirates, but had a disappointing stay in Pittsburgh, hitting .259/.303/.324 in 2011. On August 31st, the Pirates traded him back to the Braves for a player to be named later, who turned out to be Eliecer Cardenas. He hit .286 in 16 games for the Braves down the stretch, but the team collapsed, failing to make the postseason after seemingly having the wild card slot locked up. For the Braves in 2012, he got into 51 games but hit only 2 homers and had 13 RBI while batting .222, poor numbers for a player who lives and dies on the strength of his lumber.

Diaz was in spring training with the New York Yankees in 2013 and should have had a great opportunity to make the club, given it was wracked by injuries and departures via free agency. However, Diaz never gave his new team the impression that he was the solution to their needs, and he was released on March 17th; a few days later the Yankees decided to acquire aging outfielder Vernon Wells to perform the job that could have been Matt's. On March 25th, Diaz found another team, signing with the Miami Marlins.