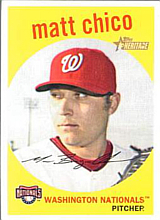 Pitcher Matt Chico was signed by the Arizona Diamondbacks and scout Mark Baca as the 3rd round pick in the 2003 amateur draft. He had hit .353 with 9 RBI for the US when they won Silver in the 2000 World Junior Championship, including a 3-run double in the Gold Medal game. Only Joe Mauer and Chris Carter had more RBI for the US and only Mauer, J.J. Hardy and Brian Hall hit for better averages. He was also 0-1 with a 5.40 ERA on the hill, losing to champion South Korea in the round-robin.

Chico made a start in his major league debut on April 4, 2007 for the Washington Nationals against the Florida Marlins. He gave up 6 runs in 4 innings of work but was spared the loss when his team rallied to win. He had been 12-6, 2.88 in the minors in 2006 to leap up to the top of the Nats' list of mound prospects, having joined the organization that summer in a deal for Livan Hernandez. Matt was only 7-9 as a rookie, but with a decent 4.63 ERA, and led his team with 167 innings pitched in 31 starts; the next busiest pitcher on the staff was Mike Bacsik, with 118 innings. Despite that promising start, he regressed in 2008, putting up a record of 0-6 and a 6.19 ERA in 11 games before being shut down by an elbow injury which required Tommy John surgery. Chico was back in the minors in 2009, making 15 starts between the Class A Hagerstown Suns and AA Harrisburg Senators, with a record of 2-4, 3.96. In 2010, he was 7-9, 3.62 in 26 starts between Harrisburg and the AAA Syracuse Chiefs. He made it back to the majors for one final start, pitching 5 innings, giving up 2 runs and getting a no-decision. He was designated for assignment after the season but stayed in the Nats organization. Injuries struck again, as he was limited to 18 ineffective relief appearances between Harrisburg and Syracuse, as well as a 9-game stint with the GCL Nationals on a rehab assignment. He was 3-4, 5.87 between the three stops and became a free agent after the season, signing with the Los Angeles Dodgers. Ultimately released before the season began, he finished his career getting bombed in the Can-Am League (9.39 ERA) and Atlantic League (7.50 ERA) in 2012.