Note: This page discusses 1990s and 2000s pitcher Matt Anderson. For the scout and college coach of the same name, click here. 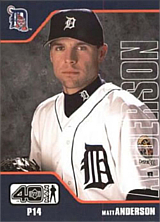 In the 1997 amateur draft, Matt Anderson was chosen first overall by the Detroit Tigers. He had been named the top prospect in the collegiate Cape Cod League in 1996 and regularly topped 100 mph on the radar gun, including a high mark of 103 mph twice. In his first professional season, 1998, he was called up from the minors where he had an ERA under 0.70. In his first major league season, he went 5-1 with a 3.27 ERA in 42 games. He also struck out 44 batters in 44 innings pitched.

He was never able to match that debut season, failing to pitch to an ERA under 4.75 in the bigs thereafter. He did save 22 games for the Tigers in 2001, albeit behind a 4.82 ERA. In 2002, he tore a muscle in his armpit throwing a bullpen, hours after competing in an octopus throwing contest with fellow Tiger Jeff Weaver in a contest to win Detroit Red Wings playoff tickets. His final season, 2005, saw him walk 11 batters and surrender 19 hits in 10 innings with the Colorado Rockies. A blazing fastball and bouts of wildness were the calling cards of his professional career.

Matt, his wife Rebecca and their son Jacob reside in Louisville, Kentucky.