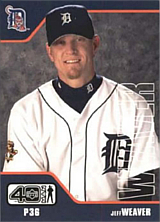 Jeff Weaver burst onto the major league scene in 1999 with the Detroit Tigers with great potential and high expectations, only to embark on a rather ordinary, up-and-down career. He helped win a bronze medal for the United States at the 1996 Atlanta Olympics. In the 1997 Intercontinental Cup, he just missed a Bronze as the US finished 4th. Weaver was 0-1 with a 2.79 ERA in the event and struck out 10 in 9 2/3 IP. On the other hand, he allowed a team-high 16 hits and 10 runs (7 of which were unearned).

He is the brother of pitcher Jered Weaver. Ironically, Jeff was designated for assignment by the Los Angeles Angels in June 2006 to make room on the team's roster for his brother. He was eventually traded to the St. Louis Cardinals, where he was a key component in winning the World Series title against his original team, the Detroit Tigers.

Jeff made two Opening Day starts in his career, taking the ball back to back years (2001 and 2002) for the Tigers.