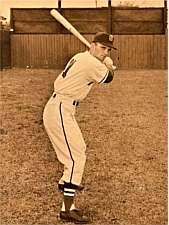 “Jurges is also pleased by the showings of two young infielders, Marlan Coughtry and Carl Yastrzemski. Both of them look like natural hitters. Coughtry has the added advantage of being one of the few rookies around who plays equally well at second and third bases.” - Ed Rumill, Christian Science Monitor, March 8, 1960, on two of the Minneapolis Millers best players heading into 1960

Marlan Coughtry played for four teams during two seasons in the majors. John Updike's essay in the New Yorker in 1960 about Ted Williams' last game ("Hub Fans Bid Kid Adieu") mentions Coughtry, as he was with the Boston Red Sox down the stretch in his first look. In that game, Marlan was 2-for-3, scoring the tying run as the Sox came back from a 4-3 deficit to win, 5-4. He was sent to the Seattle Rainiers for 1961, then got drafted by the Los Angeles Angels, splitting 1962 with the Angels, the Kansas City Athletics and the Cleveland Indians, only playing 20 games combined. He retired shortly thereafter due to a sore back.