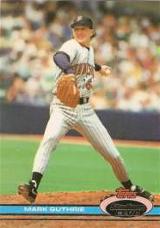 Guthrie was a starter in the minors, but spent most of his major-league career as a middle reliever, relying on a good forkball and a herky-jerky motion to get batters out.

After seven seasons with the Minnesota Twins, Guthrie was dealt to the Los Angeles Dodgers. He re-signed with the Dodgers in 1996, hoping to return to the rotation, but Los Angeles was loaded with talented starters. Stuck behind Hideo Nomo, Ramon Martinez, Ismael Valdes, and Pedro Astacio, Guthrie never started a game in a Dodger uniform.

A solid season in 1998 earned Guthrie a two-year, $3.2 million contract from the Boston Red Sox, but the veteran hurler proved ineffective against lefties and was dealt to the Chicago Cubs with Cole Liniak that August for Rod Beck. The trade was the first of many moves for Guthrie, who saw action with the Tampa Bay Devil Rays and the Toronto Blue Jays the following season.

Guthrie signed with the Oakland Athletics for 2001, reuniting him with fellow Twins minor-league farmhand Billy Beane, who was serving as Oakland's GM. When a reporter asked if Beane had been any good as a player, Guthrie declined to answer. "It might hurt my negotiating position," he explained.

His son, Dalton Guthrie, was a 6th-round selection by the Philadelphia Phillies in the 2017 amateur draft and made his major league debut in 2022, while another son, Kevin Guthrie, is a minor league coach.