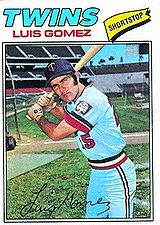 By 1974, he was playing with the Minnesota Twins as a backup infielder. Noted as a sterling defensive player with limited hitting ability, Gomez never hit a home run in his professional career in either the majors or the minors, a span of over 1750 at-bats. He spent all of 1975, and parts of 1976 and 1977 with Minnesota before declaring free agency and signing with the Toronto Blue Jays. In 1975, he played in 89 games without collecting a single extra-base hit, breaking a record held since 1916 by Mike McNally and which still stands.

He was the Jays everyday shortstop for 1978, hitting .223 in 153 games. The following year, he was relegated to back-up status behind Rookie of the Year Award co-winner Alfredo Griffin.

He was then traded with Chris Chambliss to the Atlanta Braves for Barry Bonnell, Pat Rockett, and Joey McLaughlin. He was Atlanta's most-used shortstop in 1980, hitting .193 in 121 games (with an OBP of .239 and a slugging percentage of .212). The following season - Gomez's last in the majors - he was a utility player, appearing in 35 games for Atlanta at shortstop, third and second, and even making an appearance as a one-game mop-up relief pitcher.

In 1989, he played for the St. Petersburg Pelicans of the Senior Professional Baseball Association and hit .293 (with - of course - no home runs) in 49 games with the club. In 1990, Gomez again played for the St. Petersburg Pelicans; he was batting .340 in 17 games, including pitching 2 scoreless innings, before the league folded. Gomez did not hit a home run in that season either, keeping his life-long professional homerless streak intact.