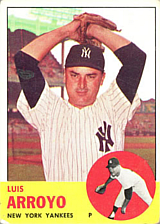 “I keep the hitters guessing and I can usually get my stuff over the plate. There’s not much more to pitching than that.” - Luis Arroyo, to UPI, July 29, 1961

Screwballer Luis Arroyo pitched eight seasons in the majors. He had a terrific season in 1961.

Arroyo was on the Puerto Rican national team in the 1946 Central American and Caribbean Games. Luis was one of the earliest Puerto Rican players to come to the majors. He and Roberto Clemente came up in the same year. Arroyo was in the minors for years, beginning in 1948, before he came to the majors. In 1949, he won 21 games for the Greensboro Patriots. As a 28-year-old rookie with the St. Louis Cardinals in 1955, Arroyo earned a spot on the National League All-Star team. The next year, 1956, he was traded to the Pittsburgh Pirates. On April 18, 1957, Arroyo hit 8th, one spot ahead of Bill Mazeroski; it would be 51 years until Paul Maholm became the next Pirate hurler to bat 8th. Although the motivation in 1957 might have been to put a real hitter in the 9th spot to start a rally before the start of the batting order, Arroyo was a good hitter for a pitcher with a .227 major league batting average (young Mazeroski had hit .243 as a rookie in 1956).

After stints with the Pirates and Cincinnati Reds, his contract was purchased by the New York Yankees in 1960. He went 5-1 with 7 saves for the Yankees that year as the team reached the World Series. The next year, 1961, he was even better, going 15-5 with a 2.19 ERA and 29 saves as the Yanks went on to win the World Series against the Cincinnati Reds. Luis struggled with injuries the next two years and was out of the majors by 1963. After his major league playing days he managed three years in Mexico. He also was a coach and GM for the Leones de Ponce and a scout for the New York Yankees, signing Ricky Ledée.

In 2010, he had a "mild heart attack" while on a cruise sponsored by the Yankees. Source: ESPN article. He was elected to the Latino Baseball Hall of Fame as part of its 2012 class. Luis died in 2016 at the age of 88. Through 2020, he remains the first of five major leaguers with the last name Arroyo.

This manager's article is missing a managerial chart. To make this person's article more complete, one should be added.
Retrieved from "https://www.baseball-reference.com/bpv/index.php?title=Luis_Arroyo&oldid=1207648"
Categories: