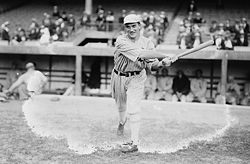 "The first player to appear for a trial was Lewis Malone of Mount St. Joseph's Academy, in Maryland. Malone was put down on the score card as "Ryan." The nationality of the name made the reporters skeptical for Connie had introduced Andy Coakley, a collegian, to the fans years ago as "McAllister" and Eddie Collins as "Sullivan." The scribes got busy and Ross Kauffman did the Burns-Pinkerton set and discovered that "Ryan" was really Malone.

"Malone was put into the lineup last Monday against Boston as the injury to Lajoie made a second baseman necessary at once. Malone made an excellent impression and continues to stick around. The reason for his using an assumed name was that his academy was to play its bitter rival, Mount St. Mary's last week and he wanted to get into the affair. The discovery of his identity resulted in his being barred from the big game down in Maryland."