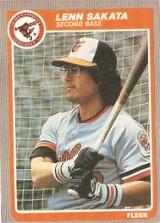 Lenn Sakata was a light-hitting utility infielder mainly for the Baltimore Orioles in the early 1980s. He began his career with the Milwaukee Brewers, but was traded to Baltimore in December of 1979 for pitcher John Flinn. He was a member of the 100-win 1980 Orioles team, the 1982 team that finished one game behind the Brewers in the American League East, and won the World Series championship with the 1983 edition of the team.

Sakata is probably best known for his part in the Orioles' 7-4 win over the Toronto Blue Jays on August 24, 1983 (Boxscore). He entered the game at second base as a late-inning substitute but after a number of pinch hitters and other substitutions depleted the Orioles' bench, Sakata was pressed into duty as an emergency catcher in the top of the 10th inning. With Sakata behind the dish for the first (and last) time in his career, the Blue Jays put three runners on base. But in succession pitcher Tippy Martinez picked each one off first base. In the bottom of the 10th Sakata, who hit 25 home runs in his 11-year career, hit a three-run home run off Randy Moffitt to win the game. He claimed jokingly that he would have done anything not to have to return for another inning behind the plate.

In 1990, Sakata played for the San Bernardino Pride of the Senior Professional Baseball Association. He played in 15 games and was batting .327 with 2 home runs and 10 RBI when the league folded.

After the 2007 season, Sakata re-joined the Chiba Lotte Marines of Nippon Professional Baseball as their farm team manager. Sakata returned to America as hitting coach of the Asheville Tourists in 2011. He transitioned back to manager of the California League Modesto Nuts in 2012 & 2013, then moved to skipper the San Jose Giants for 2014. Sakata stepped away from the game after that season and retired to Hawaii. With his time in minor league baseball seemingly done, the San Jose Giants retired his number in 2019 to commemorate his contributions to the club. Sakata, however, had a next chapter. He was called back into service by the Giants organization to manage in the 2021 season back with the San Jose Giants.