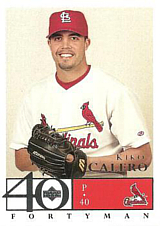 Calero was born in Puerto Rico and attended high school there. He went to college at St. Thomas University in Miami, his time there overlapping with Juan Alvarez's. He was drafted in the 27th round of the 1996 amateur draft by the Kansas City Royals and labored in the minors from 1996 to 2002. During that time, he was mostly a starter and spent parts of six seasons with Double A Wichita, where he always had a record over .500. In 2001, he went 14-5.

He joined the St. Louis Cardinals as a minor league free agent in 2003, making the team out of spring training. In 2004, he finished 3-1 with a 2.78 ERA and 2 saves in 41 games, besting the league ERA of 4.30 by a considerable margin. He made his lone World Series appearance that season, allowing 2 earned runs to the Boston Red Sox in 1 1/3 innings. Part of the Oakland A's return in the Mark Mulder deal after that season, Kiko's finest season may have been for the AL West winning club of 2006, making 70 appearances with a 3-2 record, 3.41 ERA and 2 saves, striking out 64 men in 58 innings as a right-handed specialist out of the 'pen. In the 2006 World Baseball Classic, he allowed only one hit and no runs in 3 1/3 innings for the Puerto Rican national team. He joined the Florida Marlins in 2009 for his final big league season, kicking around in Triple A in the New York Mets and Los Angeles Dodgers organizations to close his career in 2010.