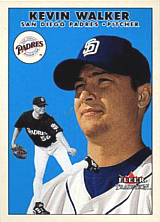 Pitcher Kevin Walker was appointed to his first major league coaching job in 2020 when he was named Assistant Pitching Coach of the Boston Red Sox, to work with David Bush under manager Alex Cora (who was soon replaced by Ron Roenicke). He moved to bullpen coach in 2021 after Cora's return. He had been a minor league pitching coach in the Red Sox organization since 2009.