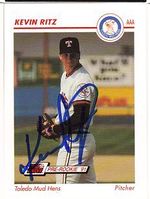 Pitcher Kevin Ritz was signed by the Detroit Tigers and scout George Bradley (scout) as a pick in the secondary phase of the 1985 amateur draft. After four seasons with the Tigers in which he failed to establish himself, he was selected by the Colorado Rockies with the 42nd pick of the 1992 expansion draft.