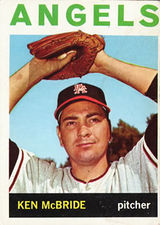 Right-hander Ken McBride was signed as an amateur free agent by the Boston Red Sox before the 1954 season. He started the first of five seasons in the minors with the Bluefield Blue-Grays of the class D Appalachian League going 18-8 with a 2.53 ERA and making the All-Star team. Ken was in the Red Sox system through 1958, winning 48 games and losing 37 when he was purchased by the Chicago White Sox on August 1, 1959.

Ken was 11-5 with the Indianapolis Indians in 1959 when he came up with the White Sox and lost his only decision in 11 appearances. He spent most of 1960 with the San Diego Padres of the Pacific Coast League before being chosen by the Los Angeles Angels in the expansion draft on December 14, 1960. Ken would prove very quickly that Dean Chance and Bo Belinsky were not the only pitchers of note in the early years of the expansion Angels, winning 36 games in his first three years of the new franchise and being picked for the All-Star team in all three years, (1961-1963).

In 1962 he finished 11-5 including 10 straight victories at one point, but missed the final weeks of the season after suffering cracked ribs in a collision at home plate. The righthander then tied Chance for a team-high 13 wins in 1963, the year he was named the American League starter in the All-Star Game in Cleveland, OH, where he had been a three-sport star in high school.

McBride had arm problems the next two seasons, winning only four games, and this ended his mound career at age 30, after eight years in pro baseball with a 40-50 major league record with a 3.79 ERA. Ken did well in his minor league tenure, finishing up with 70 wins and 57 losses and a 3.26 ERA. Out of baseball for a few seasons, Ken came back and was a pitching coach for the Milwaukee Brewers in 1974 and 1975.

McBride, who is retired in Westlake, OH, has been president and chief operating officer for the Norris Brothers Machinery Company in Cleveland, OH.