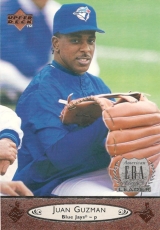 Juan Guzmán was overlooked to make the All-Star lineup in 1993 despite finishing the season 14-3 with 194 strikeouts (3rd in the American League). On the other hand, he had a 4.74 ERA in the first half of the season, making the exclusion a reasonable one. He also finished the season with 26 wild pitches, only the second pitcher since 1905 to throw more than 25 (Tony Cloninger threw 27 wild pitches in 1966.) He was one of only four pitchers since 1876 to have at least 40 wins and less than 15 losses within his first three seasons, with the others being Sal Maglie, Whitey Ford and Roger Clemens.

Guzman again was not selected as an All-Star in 1996. He had gone 7-6 with a league-leading 3.25 ERA in the first half before again improving in the second half, finishing at 11-8. What's more, he would up with the ERA crown that season, lowering his mark to 2.93.

During the beginning of his career, he wore an unusually high uniform number, 66.