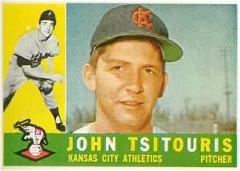 Right-hander John Tsitouris was signed as an amateur free agent by the Detroit Tigers right out of high school in 1954. Tsitouris (pronounced "tiss-sit-TUOR-iss"), appeared in only three games for the Valdosta Tigers of the Georgia-Florida League with no decisions in 1954, his first year in pro ball, but came back strong in his second year, again with Valdosta, chalking up a 10-9 record with a 3.07 ERA while pitching 173 innings.

John came back even stronger in the 1956 season, starting out with the Terre Haute Tigers of the class B Illinois-Indiana-Iowa League, where he quickly went to a 5-1 record in eight outings and was sent to the Augusta Tigers of the class A South Atlantic League and put together a 13-6 record with a league-leading 1.51 ERA (the best in the South Atlantic League's history) and also made the All-Star team. This gave him a combined season record of 18-7 with a 3.07 ERA in 216 innings.

John would split the next year between the 1957 Detroit Tigers, appearing in just two games in relief in June and go 1-0. He spent the remainder of the season with the Charleston Senators of the American Association, where he put up a 10-11 mark with a 4.14 ERA. He subsequently was traded to the Kansas City Athletics on November 20, in a twelve-player deal. John divided his time between Kansas City and the minors for three years before being dealt to the Cincinnati Reds and then winning 13 games for the San Diego Padres of the Pacific Coast League in 1962.

Tsitouris made the most of a late season call-up to the Reds in 1962 with a shutout over the Philadelphia Phillies. The following year, he had his best big league season with a 12-8 mark and a 3.16 ERA. The roommate of rookie second baseman Pete Rose, he finished the year with a pair of shutouts over the St. Louis Cardinals in an eight-day period.

John's record fell to 9-13 in 1964, but on April 18 he came on in relief of Jim Maloney in a game against Sandy Koufax and the Los Angeles Dodgers that came within one strike of being a combined no-hitter; Maloney had held Los Angeles hitless through six innings, but was replaced in the seventh by Tsitouris, who walked Ron Fairly with two out in the ninth and then allowed Frank Howard a two-strike infield base hit.